1.3 – Analyzing and Interpreting the Wisdom of the Group

Welcome to the third module in this self-directed tour. After reviewing this module, you will know:

Read the Scenario: What Happens Next? 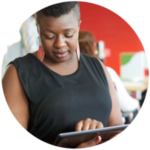 Sally understands how she and her stakeholders will work together to generate ideas and then organize and attach value to them, and she’s intrigued by the GCM process.  What happens next?

How will Sally manage all this data?  How does GCM help her organize, analyze, and interpret all the information she’s collected to help her foundation make decisions about how to make the biggest impact going forward?

Click below to learn about the second half of the GCM process, in which the data set is analyzed and those results are interpreted.  Once you’ve taken the lesson, return to this page to make a recommendation for Sally.

A Look at the Last Three Steps of the Process

We explored the first few steps of the GCM process in the previous module.

By the end of step 4, the researcher has a data set to analyze in step 5.

Step 5 of the GCM Process 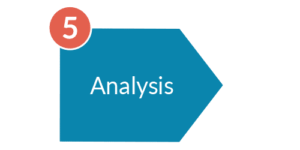 In step 5, the researcher uses statistics to analyze the sets of sorted responses to the focus prompt. She produces a similarity matrix, a table of values that indicate how often each statement was sorted with each of the other statements. Then she uses those values and a process called multidimensional scaling to create a “map” of the statements.

This first concept map is the point map. In this example, we use only 10 ideas, but in most projects there are usually between 80 and 100 unique ideas. 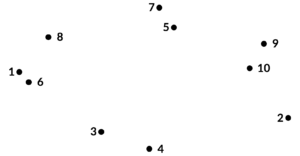 Each point on the point map represents one specific idea from a participant in response to the focus prompt. Responses that are closely related, according to how participants saw their similarity, are close together on the map; responses that are different are farther away from each other.

On the point map, the distance between points is what is important.

Once the point map has been created, it is analyzed further using a process called hierarchical cluster analysis, to create the cluster map. 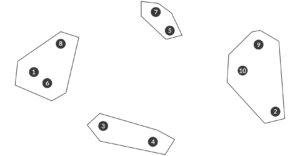 The researcher creates the cluster map using hierarchical cluster analysis. This map shows the clusters overlaid on the point map.

The cluster map is a way of sharing a structure that all participants helped build, at a higher level. Concepts or themes emerge from the specific idea responses.

Given a particular point map—in this case, one that contains 66 ideas, how many clusters is the right number of clusters to choose for the solution? 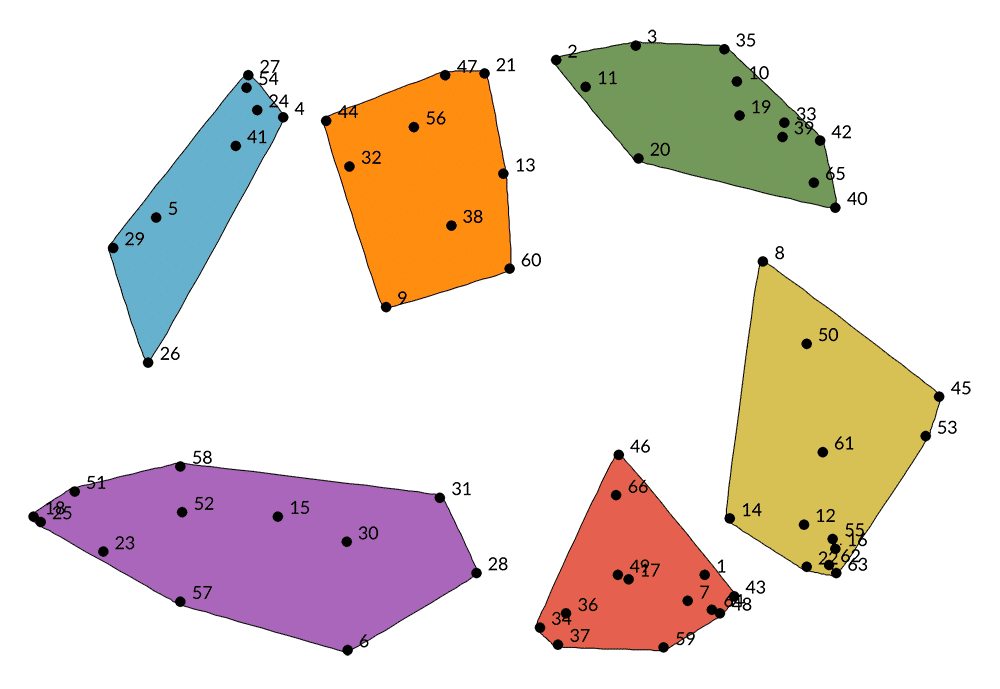 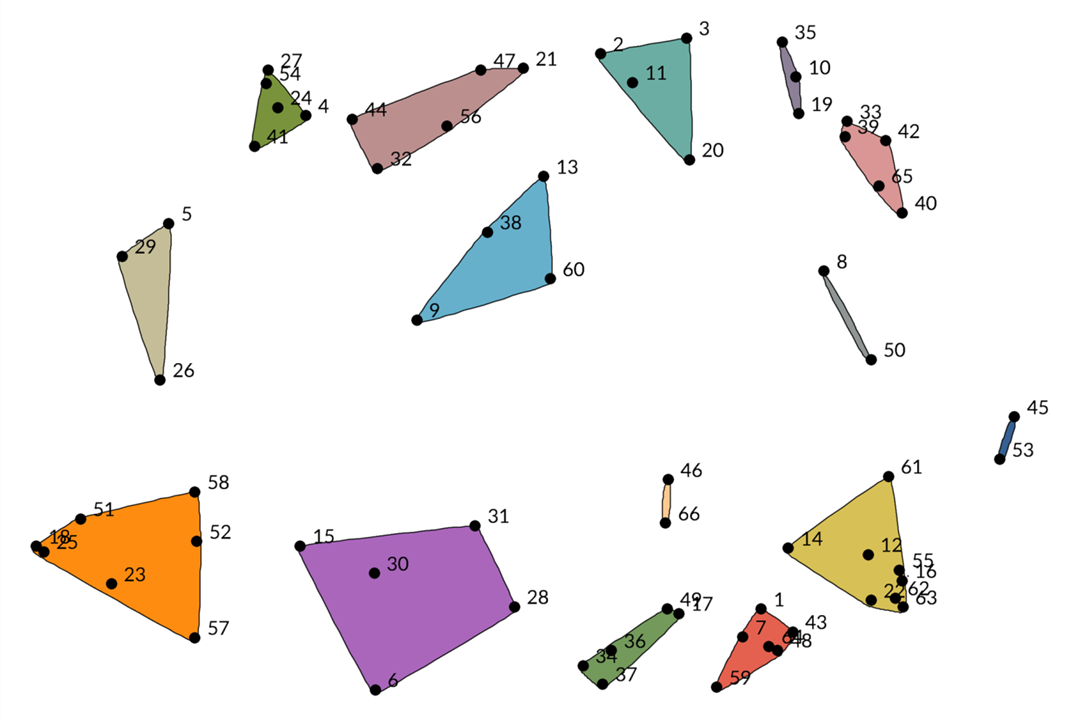 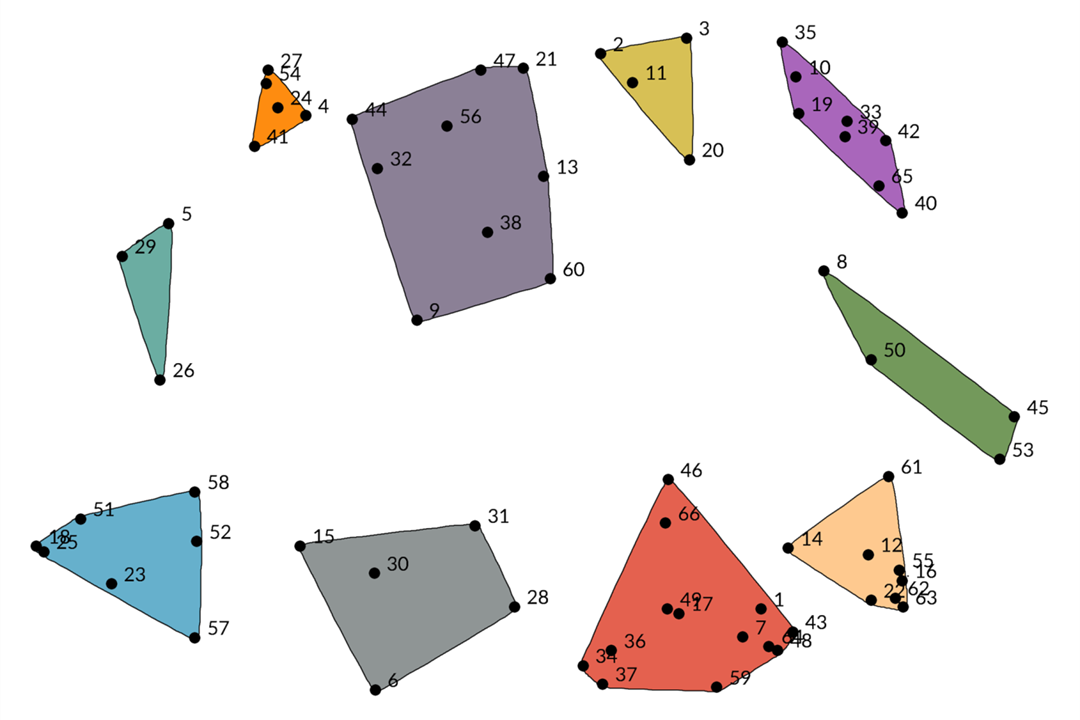 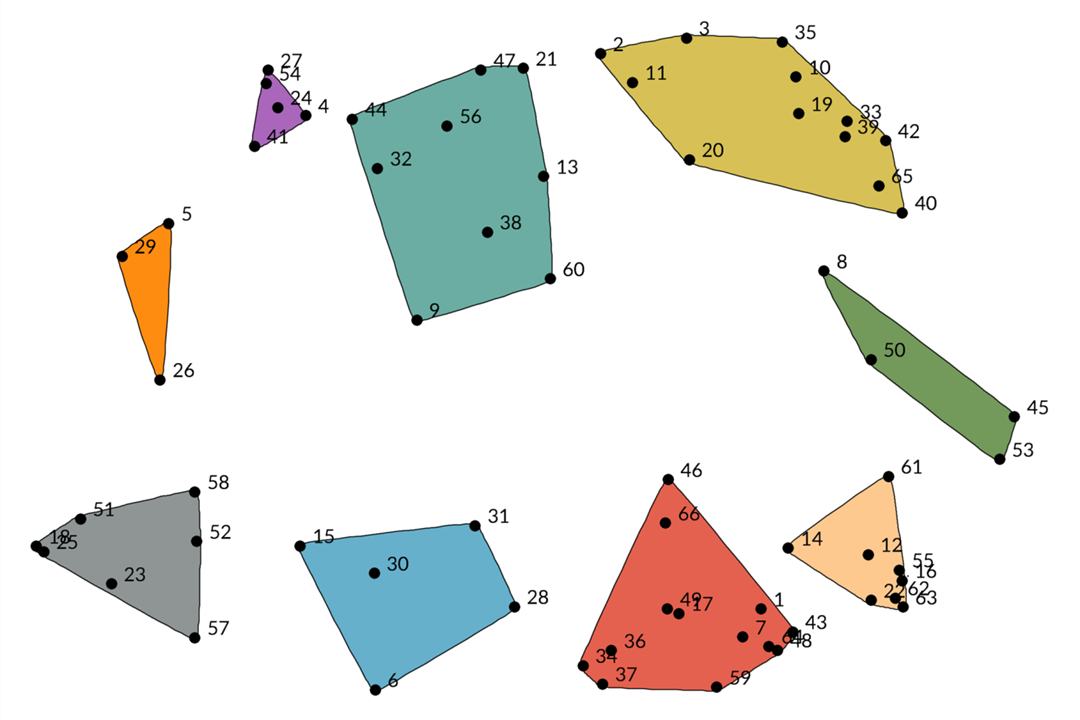 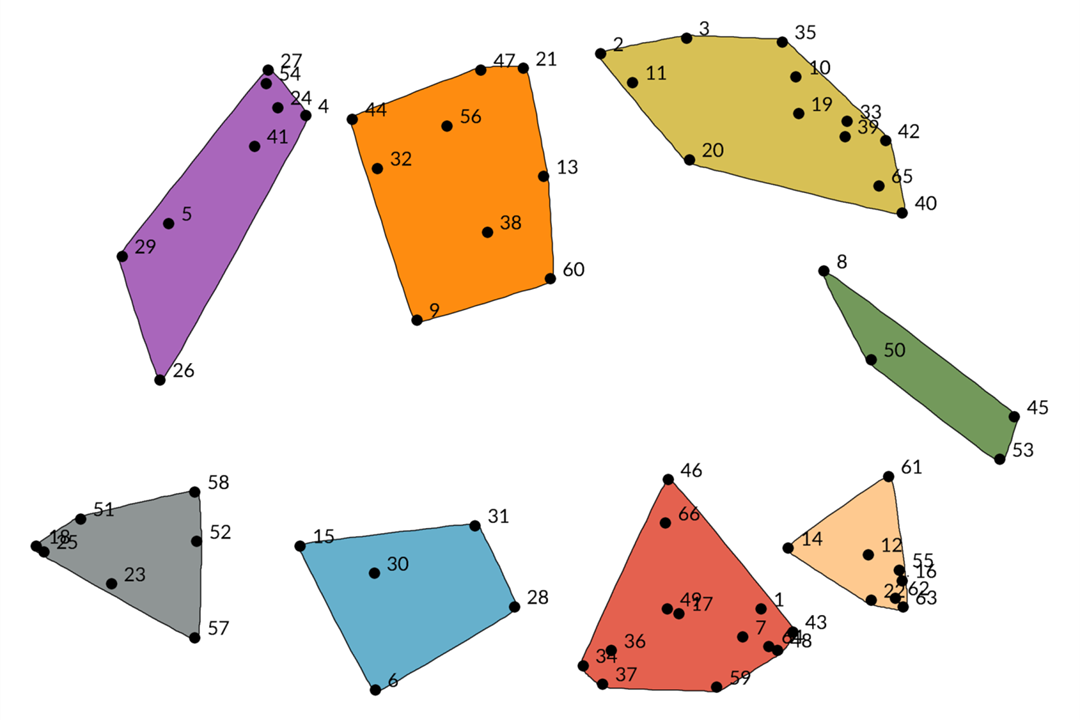 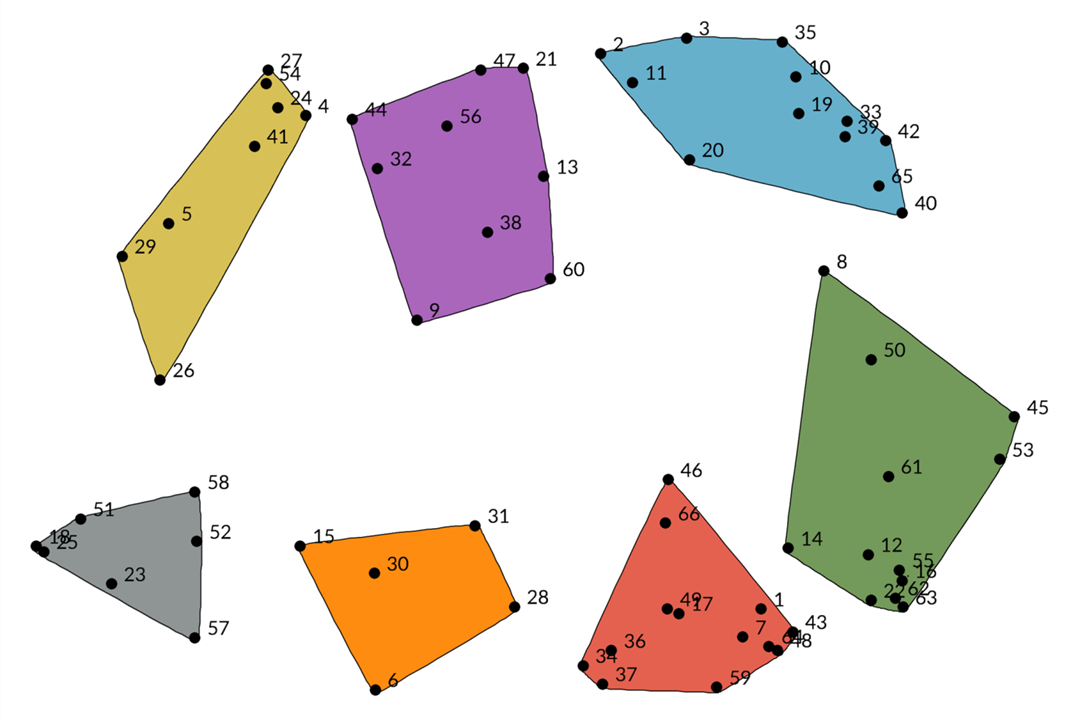 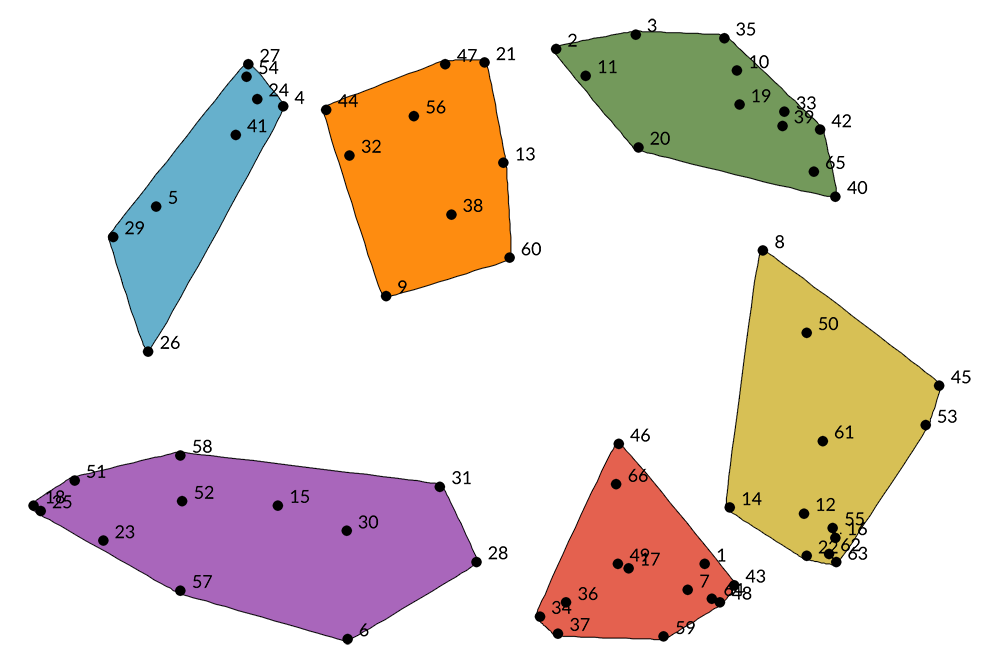 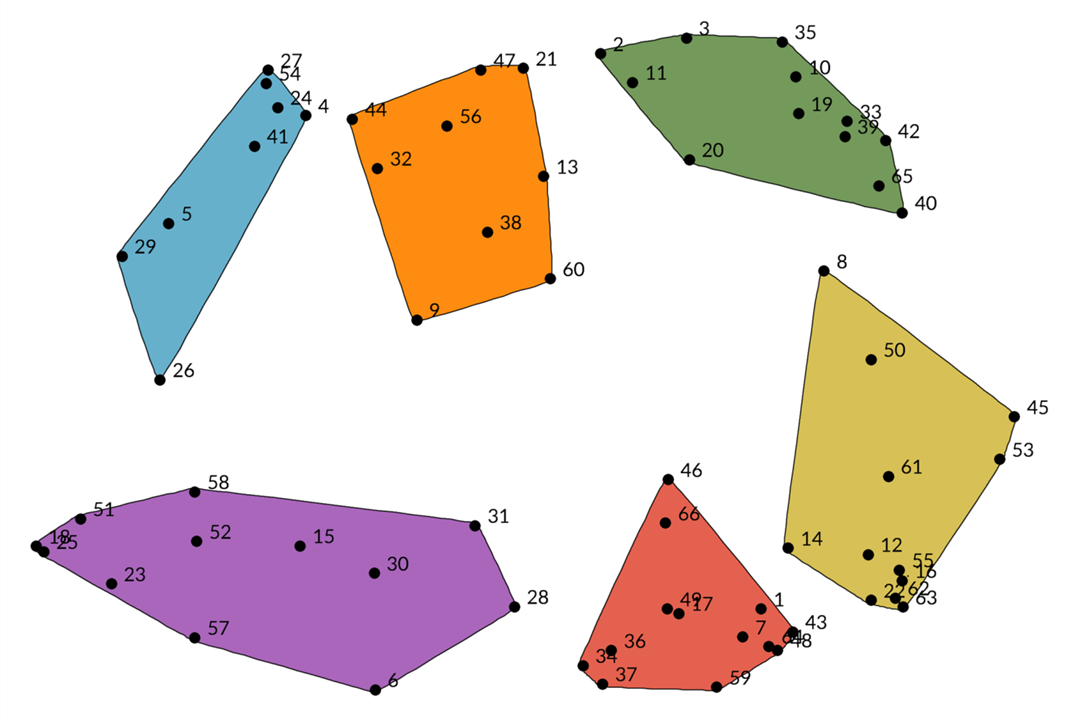 As you can see, it’s possible to create a wide range of cluster maps, some with many clusters and some with fewer. Which cluster map is “correct”? This is a question that the researcher must consider carefully. She must determine which cluster solution best expresses the way the group thinks about the issue at hand. Her choice of the best solution will depend on the purpose of the project.

After the cluster map is created, the researcher can overlay the ratings data.

Step 6 of the GCM Process 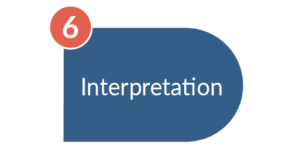 In step 6, the researcher shares the maps and other outputs with the participants. Participants review the results, give feedback, and use their understanding of the context and issue at hand to interpret the maps and outputs. This is a critical part of the process, bringing fuller meaning to the results, and deepening the understanding of the collective mental model.

Step 7 of the GCM Process 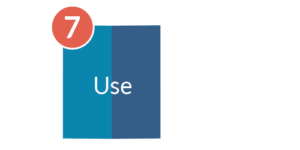 The process usually concludes with collaboration between the participants or a representative group and the researcher in step 7.

When the researcher initiated this project, she did so with a particular purpose – to use GCM to help her make a decision, develop a theory, or create a plan. During step 7, the researcher and participants work together to craft a plan for utilization, develop an assessment plan, and then to use the results for the purposes of the project.

An Example – The Future Foundation

Let’s see how analysis is going for the team in our example, the Future Foundation. The researcher has created a point map to show the relationships between the responses in the data set. 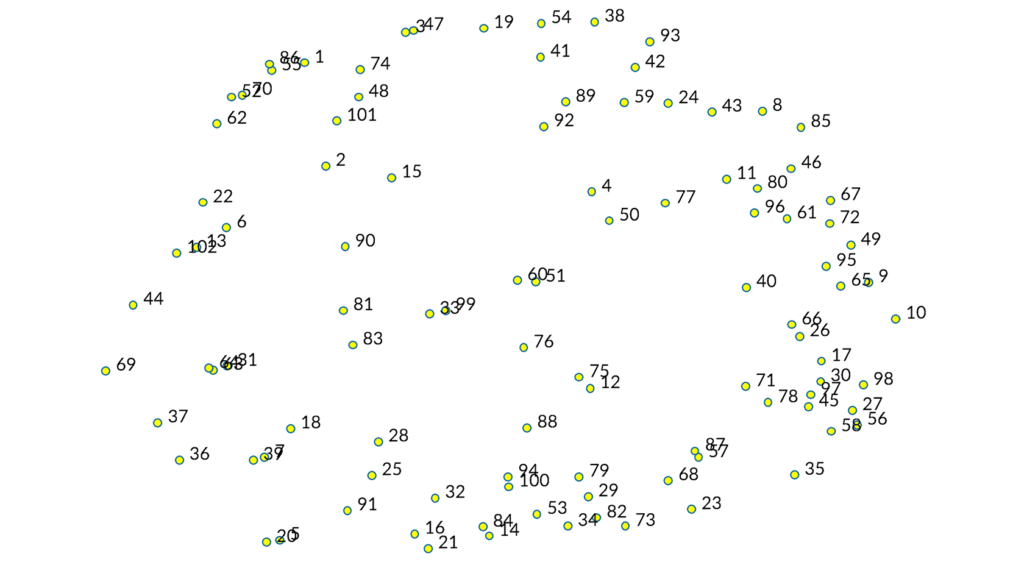 Ideas that were more frequently sorted together are closer together on the point map, like these three:

These three statements appear close to one another on the map because the participants felt they were similar in meaning. 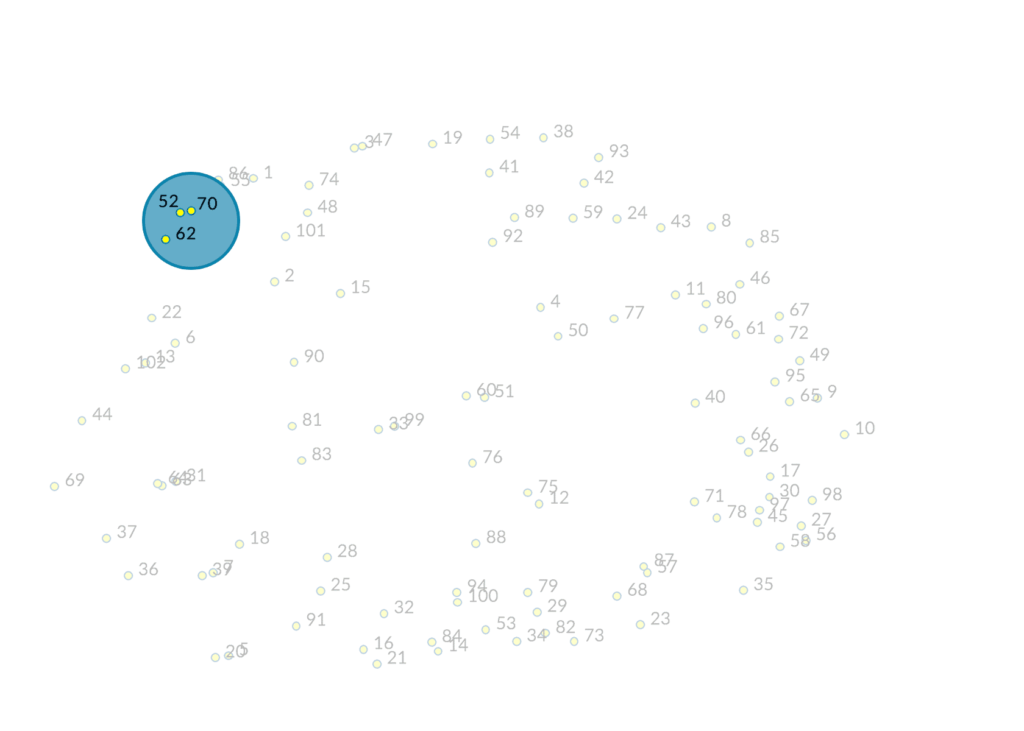 Responses that are quite different appear far away from each other on the map, like these three:

These appear far away from each other on the map. 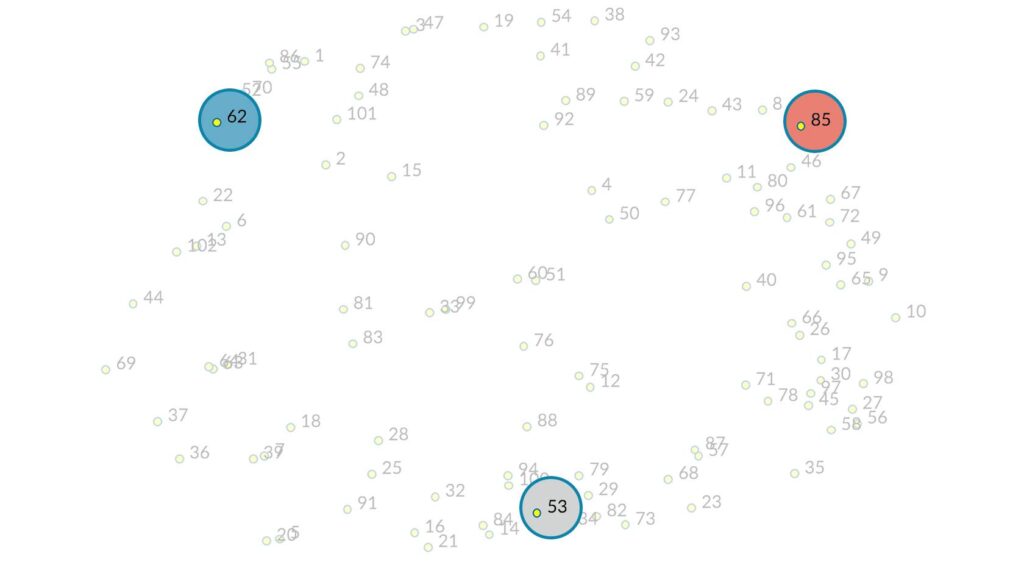 The researcher studied the point map and decided that the data is well described using eight clusters. They are labeled below as Families, Corporate wellness, Rural health, Poverty, etc. 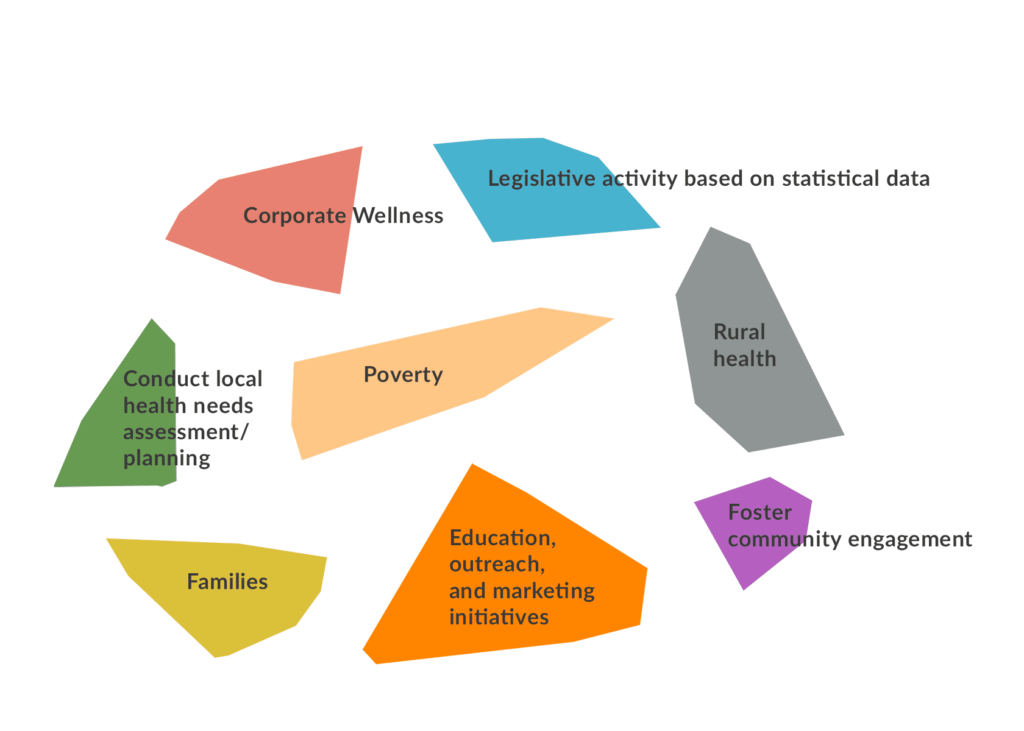 Each cluster represents a set of ideas that together reflect a common theme. The Families cluster included these statements:

After the cluster map is explored, it is time to overlay the ratings data. The researcher used “importance” to understand the current value of the statements contributed using a scale from 1 to 4. The ratings data can be added to the cluster map using layers to indicate ratings values, as shown here.

This is a Cluster Rating Map. Using layers, it shows the average rating for each cluster. Families has the highest rating. Three of the clusters have the lowest ratings on importance. 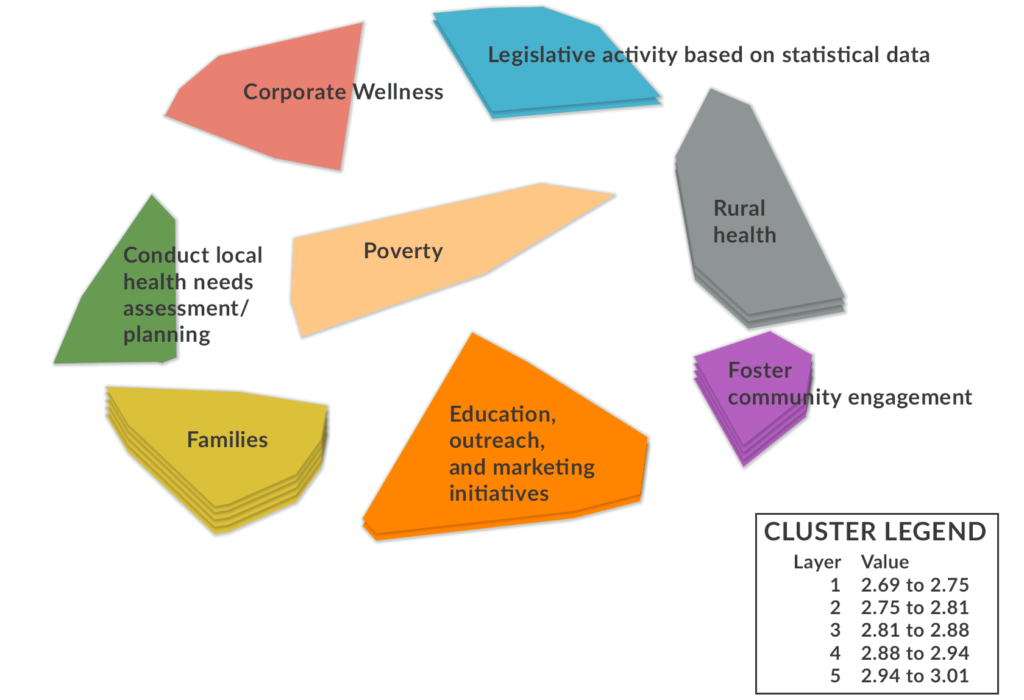 Take this quiz to check your knowledge. Then close this lesson and make your recommendation for Sally.

Make the Recommendation: Let’s Do It!

In this module you saw that the second half of the GCM process involves data analysis and interpretation to create a visual map of what people think about a specific issue, how they think about it, and what they value. Groups use this co-authored map to facilitate decisions and directions that consider everyone’s ideas and opinions.

Apply your knowledge about GCM to the scenario involving Sally. Take the quiz!

Proceed to next module

1.1 The Idea Behind Group Concept Mapping
1.2 Collecting and Sorting Ideas
1.3 Analyzing and Interpreting the Wisdom of the Group
1.4 Wrap-Up

Buy Now
We use cookies on our website to give you the most relevant experience by remembering your preferences and repeat visits. By clicking “Accept All”, you consent to the use of ALL the cookies. However, you may visit "Cookie Settings" to provide a controlled consent.
Cookie SettingsAccept All
Manage consent

This website uses cookies to improve your experience while you navigate through the website. Out of these, the cookies that are categorized as necessary are stored on your browser as they are essential for the working of basic functionalities of the website. We also use third-party cookies that help us analyze and understand how you use this website. These cookies will be stored in your browser only with your consent. You also have the option to opt-out of these cookies. But opting out of some of these cookies may affect your browsing experience.
Necessary Always Enabled
Necessary cookies are absolutely essential for the website to function properly. These cookies ensure basic functionalities and security features of the website, anonymously.
Functional
Functional cookies help to perform certain functionalities like sharing the content of the website on social media platforms, collect feedbacks, and other third-party features.
Performance
Performance cookies are used to understand and analyze the key performance indexes of the website which helps in delivering a better user experience for the visitors.
Analytics
Analytical cookies are used to understand how visitors interact with the website. These cookies help provide information on metrics the number of visitors, bounce rate, traffic source, etc.
Advertisement
Advertisement cookies are used to provide visitors with relevant ads and marketing campaigns. These cookies track visitors across websites and collect information to provide customized ads.
Others
Other uncategorized cookies are those that are being analyzed and have not been classified into a category as yet.
SAVE & ACCEPT
Powered by